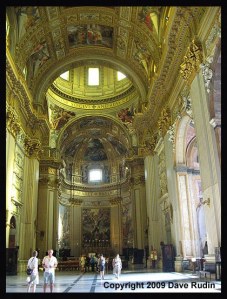 I was planning to write about this subject some time, but now seems an appropriate a time as any. You may have read last week how the audience roundly booed the new production of Puccini’s classic opera Tosca that opened up the new season at the Metropolitan Opera. (Stephen Haynes wrote about in a blog posting – here.)

I saw the old production a few times, and as Stephen mentioned, I also acted in it as a supernumerary. I have not seen the new production yet, so I can’t comment on it, but I am interested in seeing it – perhaps toward the end of the season when the great Welsh baritone Bryn Terfel will be in it.

Unlike many operas, the scenes of Tosca take place in specific, very real places in Rome, and and at a particular time, too. So, when I was in Rome earlier this year, I thought I’d visit all of these locations to perhaps get a feel for what Puccini was thinking and to compare them to what I’d seen on stage.

Here’s a basic synopsis of the opera’s three acts followed by my thoughts on the actual locations – with some photos, of course.

The story: the painter Mario Cavarodossi is in a church making a painting of Mary Magdalene when he discovers his friend Cesare Angelotti hiding in a private chapel. Angelotti is a political prisoner who has just escaped, so Mario gives him some food. Mario’s girlfriend, the famous singer Floria Tosca, is heard coming in, so Angelotti goes back into hiding. Tosca is a woman with a suspicious, very jealo 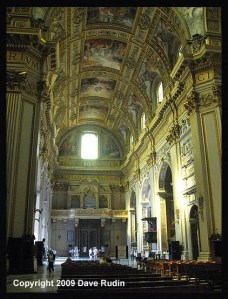 us nature, and having overheard Mario talking with someone, she suspects him of infidelity.

Tosca leaves, followed by the two men, who head off to Mario’s villa so Angelotti can go into hiding. Entering the church is the evil police chief Scarpia, searching for the escaped prisoner. Not only that, Scarpia has had the hots for Tosca for a long time. (“Tosca, you make me forget God!” he sings at one point.) His henchmen find evidence that Angelotti has been there, and when Tosca returns, he suspects she might know something. Preying upon her jealousy, he makes her think that her lover has been unfaithful, and as she rushes off to him, Scarpia sends some of his men to follow her.

The location: the church in this case is Sant’ Andrea della Valle, a church located in the old historic part of Rome. I had to do a fair amount of searching to find it, as there are a great many churches in Rome (yeah, no kidding), but finally I did come across it. As you can see from the photos, it’s a very large building with a beautifully decorated ceiling. 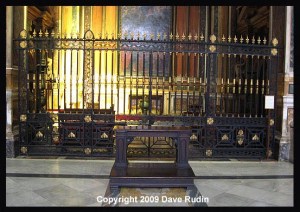 s – due to the necessity of having the entrance and the front both on stage, does not. (When I was in it at the Met, my character was a vagrant who wandered in to the church to attend the service at the end of the act. I sat down in the front row of the church – so I like to tell people that I had the best seat in the house.)

As I mentioned, Angelotti hides out in a private chapel – that of the Attavanti family. Well, there is indeed a gated private chapel in the church, but in reality, it was that of the very wealthy, very powerful Barbarini family. I guess Puccini didn’t want to involve them in the story, so he changed the name.

The story: Scarpia is in his apartment eating supper. Mario is brought in by his men for questioning, his having been found via Tosca. He’s taken into the next room where he gets tortured. Tos 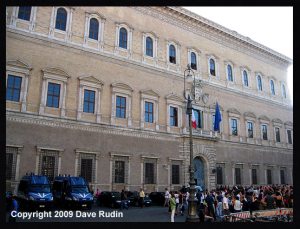 ca is brought in following a concert, and Scarpia tries to get information from her so he can stop torturing Mario. Reluctantly, she agrees. (Angelotti is eventually discovered but kills himself rather than be taken alive.)

Mario is brought into the room, and when one of Scarpia’s men brings news of a victory by Napoleon – a defeat for Scarpia’s side – Mario shouts out “Victory” and is quickly sentenced to death by Scarpia. Once again, Scarpia tells Tosca she can save him. She asks how much money he wants, but says that money is of no concern to him. He wants her. (Not body and soul. Just the body.) Tosca sings one of the most famous soprano arias, “Vissi d’arte, vissi d’amore” (“I live for art, I live for love”), wondering how she ended up in this predicament. 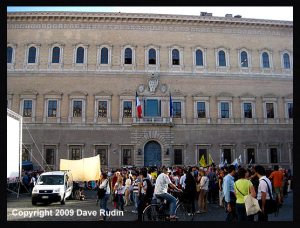 Finally, she agrees. Scarpia says he can’t be seen to allow Mario to get away, so he says he’ll set up a mock execution, without real bullets. He calls in one of his men and tells him to set up the execution the way it was done for a certain Count Palmieri. He then writes up a note guaranteeing free passage for Tosca and Mario, who will get up and leave once everyone has left the execution site.

While Scarpia is writing the note, Tosca wanders around the room. As she passes the dinner table, she notices the knife and quickly picks it up, hiding it behind her. When Scarpia comes to her with the note, she quickly plunges the knife into him. “Die, Scarpia, die!!!” she says to him. “Choke on your own blood!” She takes the note from his hand and leaves. 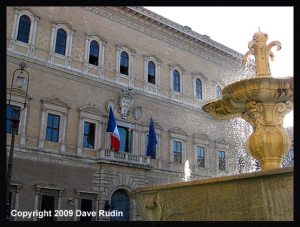 (Most times, Tosca stabs Scarpia once in the chest and he’s down for the count. When I saw it in Budapest, she stabbed him three times in the gut and then threw him to the floor!)

The location: Scarpia’s apartment is located in the Palazzo Farnese. In a magazine story about Rome, I read earlier this year that the Farnese palace is the granddaddy of Roman palazzi. It is certainly an impressive building. Sadly, it is not open to the general public as it now serves as the French embassy. There was even a political rally going on in front of it when I was there. I guess I’ll just have to imagine what it’s like inside.

The story: Mario Cavarodossi is lead to the roof of a building to be executed. He bribes the jailer to deliver a farewell note to Tosca. He sings one of the greatest of tenor arias, “E lucevan le stele” (“And the stars shined”) as he writes the note. Tosca enters surprisingly, telling Mario of what’s happened. Scarpia is dead at her hand, but the execution wi 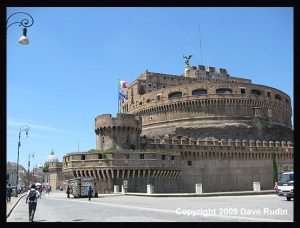 ll be a sham. She coaches him on how to fall and pretend to be dead – she’s a professional actress, she says, but he’s just an amateur, after all.

Finally, the execution team arrives and Mario is stood up in front of them. The guns are fired and Mario does, indeed, fall very convincingly. After everyone leaves, Tosca goes over to Mario to rouse him. She discovers to her horror that the bullets were real after all and that he’s dead. When men come back, now with the knowledge that she’s killed Scarpia, Tosca rushes to the edge of the roof. Not wanting to be taken alive, either, with a cry of “O Scarpia, avanti a Dio” (“Oh, Scarpia, before God!”) she leaps to her death. 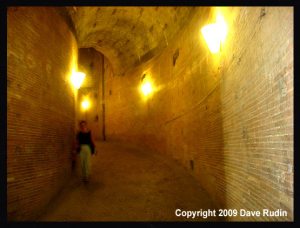 The location: Act III takes place on the roof of Castel Sant’ Angelo, a circular structure that was built in ancient Roman times as the tomb of the emperor Hadrian. It was later enlarged and built upon by the popes, who built a secret escape passage to if from the nearby Vatican. One can still walk up the circular interio 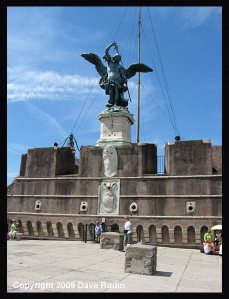 r ramp that was used for the funeral procession of Hadrian, as can be seen in the photo here.

As for the roof, it affords a beautiful view of the northwestern section of Rome. It’s a little hard to know where exactly Puccini envisioned Mario’s execution as taking place, as the topmost part of the structure is off limits now due to the presence there of a large antenna.

The highest section that people can go to now, just below the antenna level, is open on three sides. Recent railings have been installed, as there basically weren’t any originally. If someone wanted to jump, it would have been very easy. (In fact, it would have been hard not to fall off if you stood too close to the edge!) As for the firing squad, it could have only been done on the fourth side of the rectangular roof section, as that’s the only side with anything behind it.