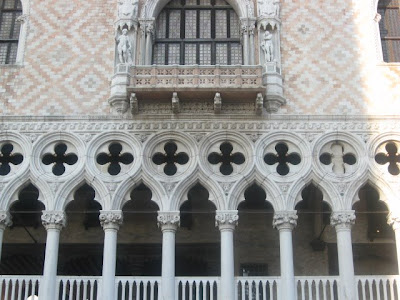 Hello again, dear readers. I have moved on to another Italian city – this time, Milan. The football (soccer) game between Italy and Brazil just ended with Brazil winning 3-0, so I guess there are a lot of disappointed people around here. Still, life must go one.

I guess I should finish writing about my time in Venice before moving on to writing about Milan. When I wrote last time, I was just finishing up my second day out of the four I spent there. On the third, I decided to take to the water, buying a 48-hour water bus pass for 28 Euros. (That’s over 4 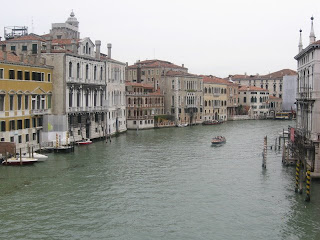 My first goal was the island of Murano, known for its glass blowing industry. On the way to the Fondamenta Nova – part of Venice’s northern edge, so to speak – to get the boat, I came across a young Russian/Ukranian couple, Oleg and Ludmilla, who I had met in Florence several days earlier while climbing down from the top of Giotto’s tower. After talking with them for a little while, it was on to the boat and Murano. What did I find there?

Mostly shops selling glass – not surprising considering that glass-blowing is (apparently) the island’s major industry. There were some beautiful things on display, for sure, but also a ot of kitschy little stuff. I did attend one glass-blowing demonstration, but otherwise just walked around. Some of the waterfront views were quite nice, but I didn’t stay terribly long.

From Murano, I had thought of taking a boat to Burano (known for its lace-making) and perhaps even to the island of Torcello (which is even further out in the lagoon), but I decided to head back to Venice to use the water bus system once more to visit the Giudecca. This is a long island that makes up Venice’s southern part (not including the Lido), separated from the rest of Venice by the 400 meter wide Giudecca Canal. I had read that it’s mostly residential, and that seemed to be true. It was certainly very quiet, though there does also seem to be a significant industrial content 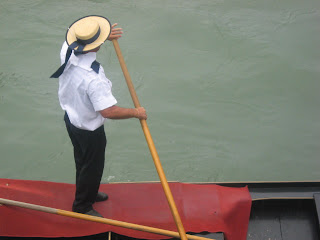 After returning to the hotel for a short time to take care of a few things, I headed out again with the intention of doing something I had not done before – go to the Punto Dogana, the pointy tip of the Dorsoduro section.. I had wondered what it was like out there, so I set out to find out – and I did. When I got there, I was surprised to find a statue about 7 feet high of a nude boy holding a frog. This I did not expect to see, especially since I thought the building next to the point was a church building. Instead, it belongs to an arts foundation, and the statue is part of an arts display, apparently. As I had an unlimited boat pass, I took the water bus back when I saw one coming up to stop.

I used my pass once again the following day, this time to take a boat up the Grand Canal to the railway station. I got off there, did a little souvenir shopping, and then crossed over the bridge to the other side of the Grand Canal to do some exploring. I didn’t have any plan in mind. My goal was to just wander, eventually working my way down to the Accademia Bridge.

I was planning to go to the Ghetto that night for dinner, having been invited earlier in the week to attend the weekly Sabbath dinner at the kosher restaurant, but I thought I’d get something to eat earlier. I wrote last time about how I had pizza at a place run by Chinese people. Well, looking around, I saw 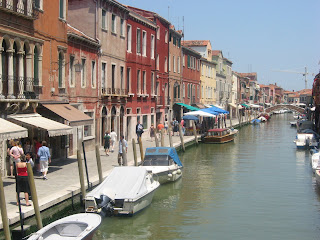 a lot of pizza places in Venice run by Chinese. This time, I went into another such place and asked for pizza bianca – white pizza, or pizza without tomato sauce. I tried to explain to the girl what I wanted, but she didn’t seem to understand, so I moved on to the next pizza place – also run by Chinese.

Again, I asked for white pizza. She didn’t seem to understand at first, but then I made some headway. “Pizza con mozzarella, funghi e tonno – ma no salsa di pomodoro. Si?” Finally I got the message across and got what I wanted, but as I wrote before, Venice seems to be changing demographically.

After walking around a bit more to take some final photos of Venice, I took the #52 boat to the Ghetto, just a stop or two after the railway station. This was to be the boat I would take from my hotel to the railway station to depart from Venice, so I was also interested in finding out how long the ride there would be, too. Dinner was nice, and I met people from around the world, but the tone was a bit more celebratory than usual, perhaps, as about half a dozen rabbinical students (m 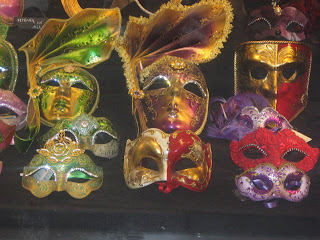 ostly American) who had been studying in Venice had just been their rabbinical exams this weeks, so there was a lot of singing going on.

I had planned to leave around 10 or 10:30, but the older rabbi in charge asked me to stay for the second dinner seating. I didn’t want to eat any more, but as I had no reason not to stay, I did. That gave me a chance to talk some more with the students, but I didn’t leave until after 11:30 – about 15 minutes after the last boat to my hotel had left. I had originally planned to walk back, it being my final night in Venice, but as it had rained that evening and threatened to do so again, I was really counting on taking the boat back.

Still, I had no choice buy to walk, and although lightning flashes lit up the sky and thunder rumbled, it didn’t rain. As was the case three nights before, I got totally lost once the main street Strada Nova came to an end, so again I followed the signs through the quiet, mostly empty streets to San Marco. In St. Mark’s Square, two six piece orchestras were taking their turns playing as I had seen before. On my last ni 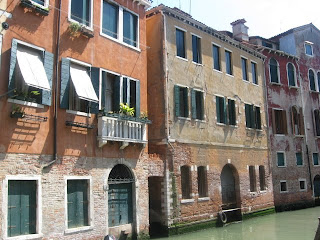 ght in Venice, I stood there spellbound as one group played the theme song to the film “Titanic,” and for that moment, all seemed right with the world.

As I wrote before, I am now in Milan. Coming to this busy city from Venice feels a bit like waking up from a dream. I was going to write a little about it tonight, but as it’s late and I’m feeling tired, I think I’ll end it here.