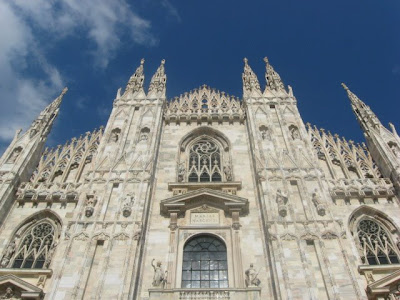 I’ve got a little time now, people, before I go out for the evening, so I thought I’d try to write a bit about Milan before I get too backed up in my writings.

Today is my third and final day here. I arrived on Saturday afternoon after a two and a half hour train ride from Venice. I had never visited Milan before, but as the trai 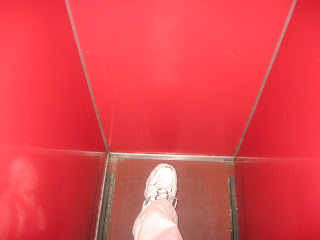 n rolled into Milano Centrale station, I had to remind myself that I had rolled into the station before – not once, but twice. That was on my first visit to Italy in 1990, when I arrived from Germany and changed trains to go to Turin, and then when I left Italy, arriving from Venice and changing for a train to Zurich.

Now I was going to actually spend some time in the city. I suppose I can call Milan something of an Italian equivalent of New York City – a large commercial center with a lot of activity, especially in the world of fashion. It’s an elegant city, with many beautiful old buildings, though not seemingly as old as the oldest parts of Rome, Florence or Venice.. 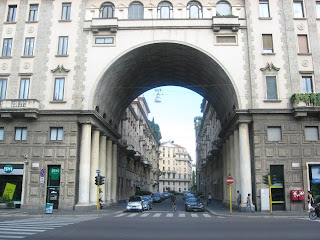 [The owner of the hotel here just changed the channel on the TV and the original Star Trek is on. It’s strange hearing Kirk and Spock speak Italian!]

Back to Milan, it’s also a city that doesn’t seem flooded with tourists. Oh, it has its visitors, but not anywhere near the amount Rome, Florence and Venice get. On my trains to Florence and Venice, my rail car was pretty much close to full each time. Coming here to Milan, the car was nearly empty. Also, in the two restaurants where I’ve had dinner here, I think the only language spoken by the other patrons was Italian. No English, French, German, etc. Food prices seem lower here, too.

Anyway, after my train arrived and I dragged my luggage through t 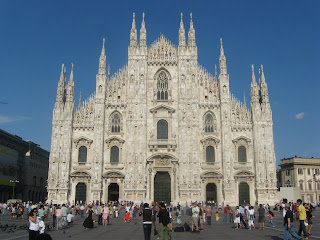 he streets to my hotel, I checked in and got organized. The hotel occupies the fourth floor of a building here and it thankfully has an elevator. However, it’s one of those elevators that was installed in the midst of the staircase some time after the building was built, and this elevator is small – about five feet wide but only about two feet deep. (Seriously. Look at the photo with my foot among the red elevator walls.) It reminds me of the elevator in the film “The Producers” that Max Bialystock and Leo Bloom squeeze into with Roger Debris’ assistant, Carmine Guilla, only they would never have fit into the one here.

After settling in and resting a bit, I took a walk into the center of town, seeing the great Gothic spires of the Duomo (cathedral), walking through the Galleria Vittore Emmanuelle (a series of four five-story buildings with the area between them covered by a glass and metal structure built in the 1800s) and the famous La Scala opera house.

After exiting the Galleria into the Piazza della Scala, across th 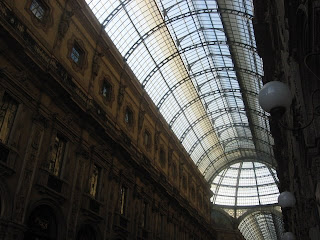 e street from the opera house, I came upon an example of Milan’s being the fashion capital of Italy: a rehearsal for a fashion show was going on, with lights and TV cameras set up. As I didn’t have any other plans, I stayed around for a while and watched the girls girate through rehearsals of their dance numbers. I took a few photos, too. I didn’t feel like waiting around an hour and a half for the show to start for real, so I just walked back to my hotel, stopping by for some pizza (prepared by Italians) on the way.

Yesterday was down on my schedule as a day to hit the museums here. I was not planning to go to one of Milan’s main attractions – The Last Supper, painted by Leonardo da Vinci – as a reserved ticket is required and I was unable to get one before I left home, even though I tried to book one online over a month ago. (Only 25 people are allowed in at a time, for a total of 15 minutes.) Still, the hotel manager suggested that I might be able to get in on a Sunday, so I figured I had nothing to lose by trying.

When I got there, next to a church in a quiet part of town, I s 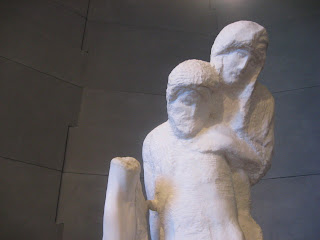 aw a sign inside that all of the tickets were sold out. Still, I told the woman at the desk that I had tried to book over a month ago without success and had travelled a long way to be here. She said she couldn’t help me, other than to suggest that next time I try to book a ticket not online but via the phone. If one tries to book online now, she said, the soonest they can get a ticket is for September, but by phone, one can get a ticket for only two weeks from now.

I couldn’t believe what I was hearing. If I had phoned instead of using the website to book the ticket, I could be going in now? I mean, what kind of bullshit is this? Of the 25 alloted tickets per session, do they only allot five for online booking but 20 for phone orders??? If that’s the case, why not tell people about it? 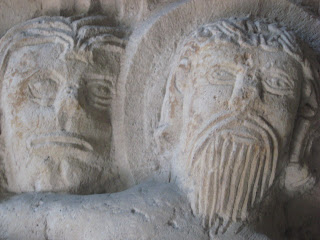 Still, it gets worse. As I couldn’t get in to see the Da Vinci painting, I walked over to the Castello Sforzesco, a huge fortress built centuries ago that houses a number of museums. In the outer courtyard, I was speaking with a fellow from Buenoa Aires who also tried to get in to see The Last Supper without an advance ticket. He said that he counted the number of people on one tour group going in and it was only 15. He then asked if he could go in, as there was space for ten more. The answer he got (according to him): “Sorry, but we don’t actually have the tickets here, so you can’t go in.” Again, what kind of an asshole has set up this system? This painting is a world treasure and they’re doing everything they can to make it as difficult as possible to see it!

I spent several hours at the Castello, going through the collections. The highlight was the Pieta Rondandini, an incomplete sculpture by Michelangelo that was ap 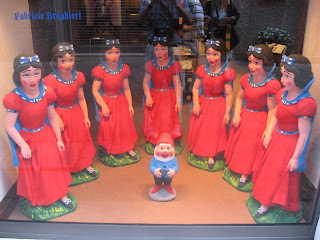 parently one of the last pieces he worked on during his life (see photo) There was also a medieval carving of a bearded fellow who looks a lot like a good friend of mine. (If you’re reading this, you know who you are.)

After that, I walked on over to the Pinacotecca Abrosiana – the Ambrosian Gallery – a nice collection of paintings in a beautiful old villa. Among its highlights were paintings by Da Vinci, Botticelli, Titian and Caravaggio – plus Raphael’s life size preparatory drawing for his painting, The School of Athens, which I saw in the Vatican.

I still had some time left before heading back to the hotel, so I walked to and through the Quadrilatero D’oro – the Golden Quadrilateral – or Milan’s fashion district. All of the high end designers seem to represented here, some with more than one store. Armani, Versace, Gucci, Pucci, Rolex, Cartier, YSL, Bruno Magli, Salvatore Ferrag 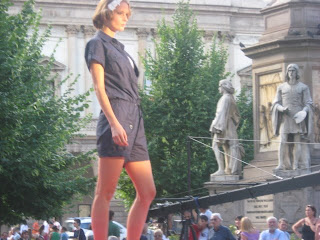 amo – the list goes on. One of the streets in this area is named Via Gesu – Jesus Street – which is appropriate because after seeing the prices, you’ll want to exclaim, “Jesus!!!” I walked around looking at the window displays, my favorite being one that had seven Snow Whites with one Dwarf.

After taking the tram back to my hotel, I thought of eating at a Chinese restaurant nearby. After looking at the menu, I decided to stick to Italian food, so I went to the osteria in the building next to the hotel – only to find that this Italian restaurant was run by Chinese people, too! I know that Little Italy in New York has been eaten up by an expanding Chinatown over the years, but could the Chinese be trying to take over Big Italy, too?

Today, finally, I did 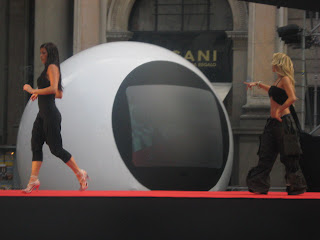 n’t have much planned. I’ve only got three granola bars left that I brought from New York and I’ll be saving them for tomorrow (as I need to leave very early, before any restaurants are open), so I went to a snack bar down the block to get something to eat for breakfast. The people working there were, of course, Chinese – but the chocolate and cream pastries were good. After that, I took the tram into the town center, where the first thing I did was to visit the museuym of the La Scala opera house. It was interesting, dealing mostly with old days of opera. Among the paintings of famous singers (Maria Malibran, Giuditta Pasta, Maria Callas, Renata Tebaldi) and composers (Verdi, Donizetti, Bellini, Rossini, Puccini) were Rossini’s eyeglasses, Verdi’s piano and a sword presented to Ms. Pasta by Napoleon. (Judging by this and the total number of pain 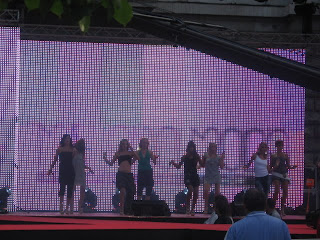 tings of her, she must have been one hell of a singer.)

Then I walked over to the cathedral, went inside to look at its soaring interior, and then walked up to the roof. I could have taken the elevator up there, and despite my left leg still bothering me, I still walked. I saw that it was a climb of only 250 steps – a pittance compared to the 414 I walked to get to the top of Giotto’s tower and the 436 to get to the top of Brunnelleschi’s dome, both in Florence.

So, that pretty much brings things up to date. I got a special night planned, and I’ll write about that next time. Until then, be well, everyone.