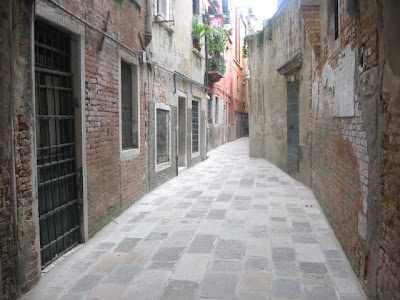 Here I am now in Venice, the city on the water. How does it feel for me to be here again?

Rome is a city for the ages – the Eternal City. Florence, with its art and imposing buildings, is the great city of the Renaissance. Yet Venice….Venice….Venice is beautiful. Venice is lyrical. Venice is entrancing. Most of all, Venice is quiet. In the past, Venice was known as La Serenissima – the Most Serene Republic. Its great days of empire and control over the eastern Mediterranean are gone, but Venice remains serene.

That’s not to say that Venice is silent. In the touristy areas like San Marco and on commercial streets, there’s lots of noise. Go away from those places and you might feel like you’re alone in the world. One can still hear sounds – of people talking, of shoes walking on the pavement, of an occasional boat going by on a canal. What you won’t hear are the sounds of cars here. No buses . No moto 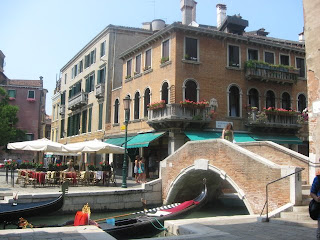 Of course, one need not worry about crossing the street and getting hit by a car, either. Still, Venice does have its unique challenges, such as getting around by boat when not walking (a challenge of its own, as you’ll read).

I arrived here yesterday morning on a train from Florence. I stepped out from Venice’s Santa Lucia station and there, across the Grand Canal, was the green domed church that I remembered from my last visit here. My hotel is way too far from the station to walk it, so I bought a ticket for the vaporetto, or water bus. I boarded line #51 as the ticket seller had advised, and I thought it would wind its way down the Grand Canal to my stop, San Zaccaria.

That’s not what happened. Instead, the boat moved off in the opposite direction, taking a major side canal and then turning left onto the very wide Giudecca canal. On th 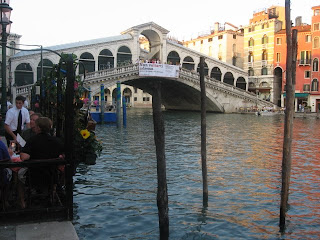 e left, we passed a very large, four deck yacht. Then a cruise ship (the West Wind, registered in Nassau), followed by some catamaran ferries. At last, some domes became visible – the church of Santa Maria della Salute – followed by the tower in St, Mark’s Square. I was indeed back in Venice.

Once I got off at the San Zaccaria stop, it was my turn to drag my bags through the narrow streets (and over one bridge) to my hotel on a street called Ruga Giuffa. It’s a nice place here, the Hotel Al Piave – the best on my trip. (I decided to splurge a little here.) After checking in and getting settled a bit (the woman at the desk was amazed that any American visitor can speak any Italian) , I head out to go to the Jewish Ghetto section – the first Ghetto in Europe. I had looked over the map and felt confident I knew exactly how to walk there.

Yeah, right. Within five minutes of leaving the hotel I was completely and totally lost. In Venice, getting 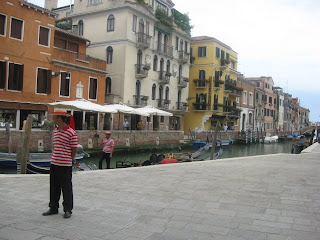 lost is inevitable, so I might as well have done so right from the start. Of course, that’s one of the joys of Venice – getting lost, wandering around and discovering things you may never have found otherwise. On the (wrong) way to the Ghetto, I came across a shop where a woman was painting ceramic carnival masks. There are plenty of shops selling such things, but not many where they’re actually painted by the artist.

I did make it to the Ghetto eventually, visiting the Jewish Museum along with the area’s three old, unused synagogues on a tour. The German synagogue in particular is a real gem – like a mini Venetian theater. After having dinner in the area, it was my turn to try my luck in getting back to my hotel. The first part was easy, walking along some main streets, but then I got to the part where I had gotten lost – and got lost again.

So, I did the next best thing: I followed the signs to Piazza San Marco – 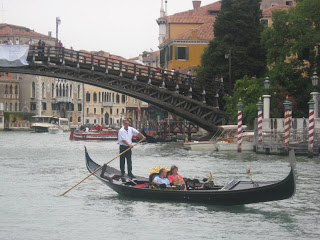 St. Mark’s Square.
I knew how to get to the hotel from there, as it’s close to the stop where I had gotten off the boat, and I also wanted to see the square. The signs did leave me there, and I found it to be a lively place. On one side of the square, in front of a large section of outdoor cafe seating, two four- or five-piece orchestras were playing musical favorites – one playing one the other one rested. They played music from Carmen, Swan Lake, Hungarian and gypsy music, and one of my favorites – “Mambo Italiano” – and it 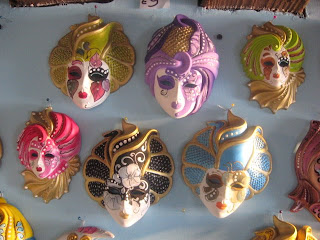 was all very entertaining. On my way back to the hotel, a jazz band was playing in front of a cafe opposite the Doge’s Palace, too.

Today was a day for more art, but first I had a good breakfast for my first tim 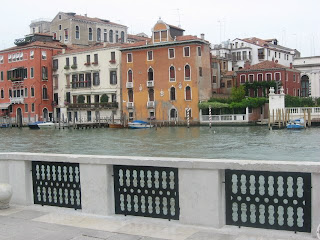 e here. The hotels in Rome and Florence didn’t serve breakfast, but this one has a nice little buffet, plus eggs made to order. After that, I crossed the wooden Accademia Bridge to visit the Accademia Gallery, Venice’s largest art museum. Then it was on to modern art at the Peggy Guggenheim collection.

Following that, on the way back to the hotel, I did something special: I paid a visit to the Teatro della Fenice, one of the world’s great opera houses where some of the greatest operas had their premieres. The theater is open to visits with an audio guide (available in several languages), and it’s a gem, though having only about 1,000 seats (compared to about 3,600 at the Met in New York). The theater was destroyed by fire in 1833 an 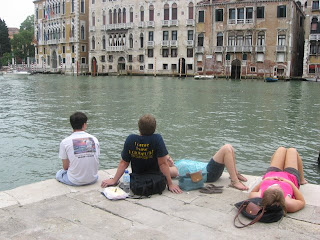 d then again in 1993, but each time it was rebuilt as it was before, showing that the theater lives up to its name, which means “the phoenix.” Though no performance is scheduled while I’m here, the people there today were treated to seeing part of a rehearsal in full costume (though with a pianist rather than an orchestra) for an upcoming performance of Wagner’s “Goetterdamerung” – the last opera in his Ring Cycle and one that I’ve not seen before.

After that, I went back to the hotel to get my big camera and went out to take some photos. On m 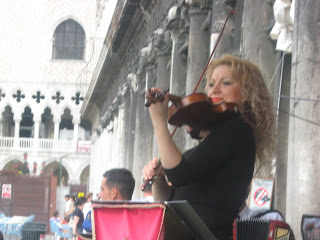 y way later to the Rialto Bridge, I found that I was passing my hotel – and I didn’t even try to do it. That’s part of the beauty of Venice – not being able to find something when you want it and then finding it when you don’t. Like I said before, it’s also nice to wander around making discoveries in the least likely places.

On the way back here, I stopped to get some pizza for dinner. The placed was staffed up front totally by Chinese girls. Some things may change here, but I don’t think the charm of Venice will.