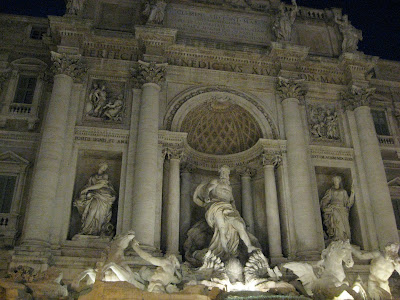 I am now writing from the city of Florence in Italy – or as it’s called in Italian, Firenze. I arrived here yesterday morning by train. I wanted to try to write last night, but I had a rather late dinner and the internet place here was closing just as I arrived.

Anyway, before writing about Florence, I’ll write a bit about my last day in Rome. Five days there is not enough time to see nearly enough, but it’s all I had, so on the final day I had some decisions to ma 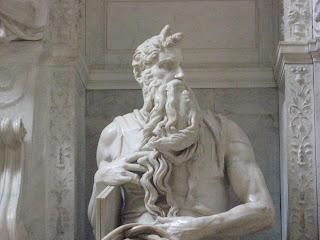 ke. For my sights of the day, I chose a comination of places that dealt with art and history, cinema and music.

The first order of the day was to visit the church of San Pietro in Vincoli – St. Peter in Chains – as it was only a short distance from my hotel. The draw of this church is Michelangelo’s tomb of Pope Julius II – which happens to include his statue of Moses. (You know.. The one with the horns.) All the visitors to the church went to see and then took photos of Moses, but almost nobody went to the reliquery to see what the church is named for: the chains which are believed to have bound St. Peter in his Roman prison. I went to take a look, as they are of historical interest.

After art and history, my next stop had to do with cinema, and it was another church: Santa Maria in Cosmedin. To get there, I walked past the site of the Circus Maximus – ancient Rome’s version of Churchill Downs, Pimlico and Belmont. There are few ruins left. Just a long, grassy, sunken, open space. Still, I imagined Charlton Heston racing here against Stephen Boyd in the 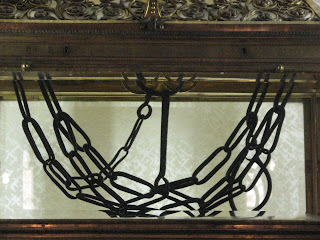 film “Ben Hur.” (Well, they would have raced here if the story wasn’t fictional.)

Come to think of it, I thought of Charlton Heston several times in Rome, first in the Sistine Chapel (“The Agony and the Ecstasy”), then at the statue of Moses (“The Ten Commandments”) and finally “Ben Hur.”

Still, he wasn’t the movie actor whose footsteps I was tracing. Those steps belonged to Gregory Peck and Audrey Hepburn in the wonderful 1953 film “Roman Holiday.” My target was La bocca della verita – The Mouth of Truth – an ancient drain cover with the face of a river god that’s set into the wall in front of the church. Legend has it that if a liar put’s his hand in the face’s mouth, it will be bitten off. I didn’t put my hand in (I was busy taking photos), but some of you may remember Gregory Peck doing so in the film and pretending that it was bitten off. (Peck and director Billy Wilder didn’t tell Hepburn he was going to do that, so her reaction was genuine.)

That done, I walked past the Theater of Marcellus – an ancient Roman structure (what’s left of it) with mor 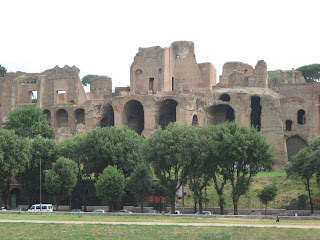 e ‘modern’ buildings built on top (fascinating how people did that) and on across the Tiber to the Villa Farnesina. This is a place I’ve been wanting to see since my last visit 19 years ago, but as it’s only open four hours a day (9 to 1), it’s not the easiest place to get to. Well, I did get there a little after noon, and though I had trouble finding the entrance, I did get there on time. My reason for going: to see the rooms painted by Raphael. Only about five rooms were open to the public, but as two of them were painted by Raphael, it was still a must-see for me.

The first of the two rooms I saw with his work was decorated by several different artists, but his contribution was the beautiful “Triumph of Galatea.” It got even better, as the next room was totally painted by Raphael and his workshop. Gorgeous. Absolutely gorgeous. I didn’t want to leave, but I went upstairs to the next floor, and though no Rapheal’s were there, there was some nice work, especially Il Sodoma’s “Marriage of Alexander the Great.”

Finally, on to music. Next stop was Castel Sant’Angelo, originally built to be the tomb of the Roman emperor Hadrian but later added to by the popes. I had an odd feeling walking up the spiral ramp that was used for Hadrian’s funeral procession nearly two thousand years ago. I went up to the roof, which affords some beautiful views of Rome and the nearby Vatican, but it was also there on that roof that the painter Mario Cavarodossi was shot down by a firing squad and the from where the singer Floria Tosca jumped to her death i 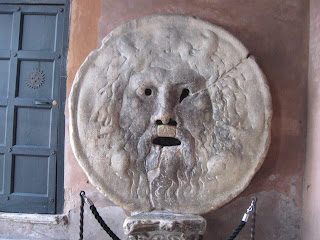 That roof was the setting for Act III of the opera, so I set out to find the locations for the first two acts. After some difficulty, I found my way the the church of Sant Andrea della Valle, the setting for Act I. It has a large, beautiful interior with a painted ceiling, and as in the opera, it has a private, gated chapel used by one very wealthy family. (In the opera the family is the Atavanti, I believe, but the real one is for the Barberini. I guess Puccini didn’t want to make it too real.)

What also interested me about seeing the church is that I performed in Act I of “Tosca” when I was an extra at the Metropolitan Opera in New York, so having been in a staged version of the church, it was interesting to be in the real one. 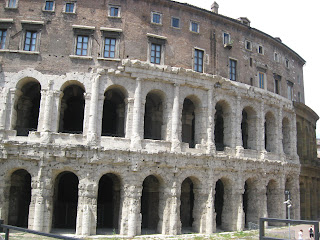 Tosca” is takes place in the Palazzo Farnese – now the home of the French embassy – so even though visitors are not allowed inside, it was still good to see it’s beautiful, classic facade.

I was pretty tired by then, so after having dinner in the Jewish ghetto section of town, I headed back to my hotel to pack. Still, I needed to make one detour on the way there: I could not leave Rome without seeing the Trevi Fountain at least once. When I got there, at night, the place was packed with tourists. If I had to see it, I guess everyone else wants to see it, too. Before I left, I reached into my pocket, took out a coin and tossed it into the fountain. Legend has it that doing so will insure one’s return to Rome. I just hope that it won’t take another 19 years.
***************************************************************************************************
So much for Rome. Rome is a city layered with different eras of history – ancient, medieval, renaissance, baroque. No surprise it is called the Eternal City. Florence, on the other hand, seems to be very much a city of the Renaissance – the great flowering of culture in the 15th and 16th centuries. Unlike Rome, which is spread out quite a bit, with a lot of open spaces, Florence is fairly compact, with narrow streets seeming to be almost on top of each other.

That compactness also seems to compress the tourists together, too. If people are staying home because of the world economic crisis, nobody told that to the people here.

I see that my time is running out here, so I’ll briefly say that yesterday I walked around a bit after arriving from Rome, climbed to the top of Brunneleschi’s dome and then I spent most of today in the Uffizi Gallery. I’ll try to give more details next time.

Until then, be well, everyone.

(Sorry, folks. I’ve got the camera plugged into this computer’s USB port but it doesn’t seem to be connecting. So, no photos today.)

A day later: I managed to upload some at another computer!