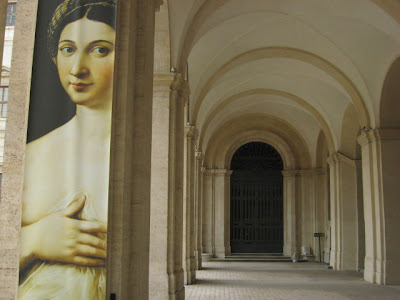 I’m still here in the Eternal City at the end of my fourth day here with one more to go. Things have continued to go fairly well. The weather was bright and sunny yesterday but once again overcast with a few brief sprinkles today. 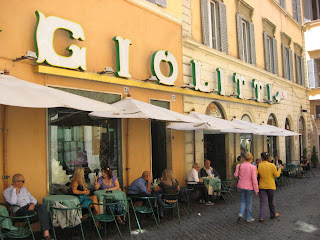 Still, I’ve spent much of the last two days indoors viewing art. My first stop yesterday was at the Galleria Doria Pamphili, a private art collection owned by a very wealthy family and housed in a huge building on the Via del Corso. It was interesting to see the collection of sculptures and paintings, and of course the building itself, but most of the paintings were from relatively minor artists, though there was a Titian and a Caravaggio.

After that, I did something that’s as important as going to any art museum: I had gelato (ice cream) at Giolitti’s. This place is something of an institution in Rome, from what I understand, and I remember having eaten there 19 years ago. It was definitely in my plans to make a return visit, and I’m glad I did, as the white chocolate and banana double scoop cone that I had tasted great. 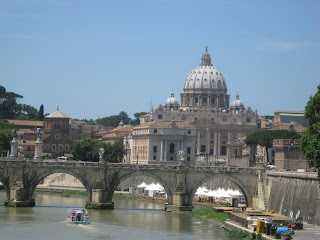 Following that, it was more art, as I headed across the Tiber and went once again to the Vatican – this time to the Vatican Museums, one of the great art collections in the world. I had read that the lines can be very long to get in, and a local person I’d spoken with advised me to go early, but I didn’t have to wait at all (though everyone has to go through airport-type security).

I started by walking through the Egyptian collection, which had some very nice painted wooden coffins from the New Kingdom. After that it was on to the galleries of classical sculpture, which seems to be the bulk of the Vatican’s collection of western art. Some of the statutes had fig leafs, some (of the same variety) didn’t. There are some real masterpieces here that I saw, among them the Apollo Belvedere and the great Laocoon (lay-a-ku-on) group.

There was also painting to see, though not of the picture hanging on the wall type, but rather paintings of the walls themselves. First was the great “School of Athens” by Raphael, painted on o 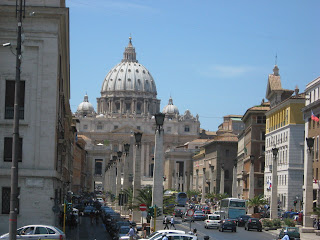 ne wall of the papal apartments. I sometimes have this as the desktop image on my computer at work, but to see it again in the paint was astounding. I passed from one room into another and didn’t see it ahead, but when I looked back, there it was – almost taking me by surprise, though it knew it was coming up. Again, after seeing art reproduced so much in books, magazines and now the internet, it really is a privilege to see the real thing – and I had to keep reminding myself that it was the real thing!

After the Raphael rooms, there was one more display of painting left – the Sistine Chapel. By this time it was late – around 5 pm – and as the light inside came only from the outside, it was rather muted. Still, one could see the magnificence of it, with Michaelangelo’s famous ceiling and the walls painted by Botticelli. Some people may think that Michaelangelo painted the ceiling lying on his back, but I read that he actually stood and craned his neck back – never fully recovering from it. Well, I guess I can sympathize with him, because after just a few minutes of looking straight up my neck was beginning to hurt! 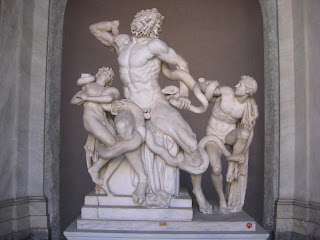 As the room was filled with tourists, I tried to imagine what it’s like when the Pope dies, as the Sistine Chapel is then used by the college of Cardinals to choose a new pontiff. One of the differences from my visit there 19 years ago was that the Lasty Judgement, on one of the side walls, can now be seen, it having been covered for restoration last time.

Despite that, the biggest change may be in regard to photography. There are signs in the Chapel that photography – with or without flash – is prohibited. In the old days, you might be able to play dumb and try to take one photo before the guards would ask you to stop. Now, with digital cameras so ubiquitous, there are so many people taking so many photos with so many flashes that the guards don’t even try to stop anyone anymore. (Whether this is a good thing or a bad thing I don’t know.) 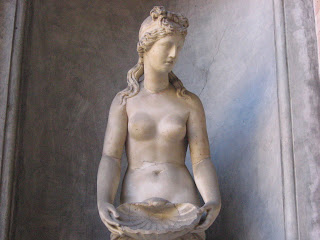 r a while and then had dinner at a restaurant where the menu was basically just a handwritten pamphlet held together by tape. On the way back I got lost – not once but twice! First, I passed a series of ancient columns incorporated into a newer building near the remains of the ancient Theater of Marcellus. Then I walked up a quiet street, eventually coming to a church. I decided to take a flight of steps leading away from the church and walked along a bit. After asking directions, I was told to go the opposite way, and so I did. I wound up on a main street, eventually coming upon another set of ancient columns set into a newer building – until I realized that it was the same set I had seen before.

Okay, so I had walked in a circle. I got out my map, and went back up the same street as before, this time following the street past the church and staying to the left. Unfortunately, there was no way to keep to the left, and I had no choice but the follow the dark, lonely street as it wound its serpentine way to the right. Now I was really lost, so I saws a man crossing the street comin 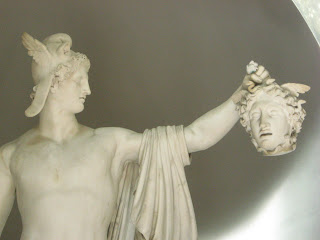 g toward me and I asked him for directions to the Colosseum (which is near my hotel). He told me to cross the street to the left and continue until I see the Colosseum on the left. When I got to that point, I took out my map to see that I had planned to walk north of the Forum but had in fact walked south and followed my way all the way around it! Anyway, I got back okay without incident.

Today, as I’ve said, was another day for looking at art. Before I left New York, I had made a (mandatory) reservation to visit the Galleria Borghese at 11 a.m. This is one of Rome’s great museums. The first floor is mainly devoted to sculpture, with Canova’s famous rendering of Napoleon Bonaparte’s sister, Paulina Borghese, as Venus. She’s reclining on a Roman style sofa, nude from the waist up, and apparently that caused a bit 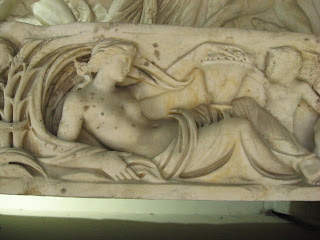 of a stir in her day. When a journalist asked her if she felt uncomfortable posing in the nude, she reportedly responded, “No, the room was quite warm.”

Nonetheless, the stars of the collection are the sculptures by the Baroque master Bernini, including David (about to fling his sling at Goliath), Pluto carrying a very reluctant Prosperina off to the underworld, and Apollo pursuing Daphne. That last one has always been my favorite – the two figures made of marble look as if they’re about to float up into the air- but the Pluto and Prosperina really left a strong impression on me. Besides the two human figures, it also includes the three-headed hound of Hell, Cerberus, which is also fantastic. It’s a shame that we never get to see any photos of it and that photos aren’t allowed. (One needs to check one’s bag and cameras before entering.) 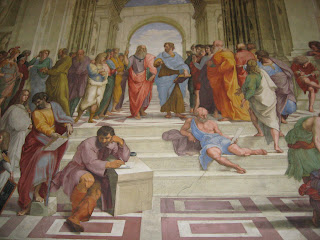 There were also some great paintings by Caravaggio – never one of my favorites, but I came away with a much better appreciation for his work, with its very dramatic lighting – and upstairs were some fine works, including “Sacred and Profane Love,” an early masterpiece by Titian that I had not seen before.

After that, I strolled down the Via Vittorio Veneto – immortalized, apparently, in Fellini’s film La Dolce Vita – and saw all of the wealth on display: the fancy shops, fancy restaurants, men wearing dark sports jackets with sunglasses (some with a fashionable three day stubble), etc. “The Sweet Life,” indeed.

Next was the National Gallery of Ancient Art in the Palazzo Barberini (which is actually a collection of Renaissance and Baroque paintings). Among the works I saw were more famous 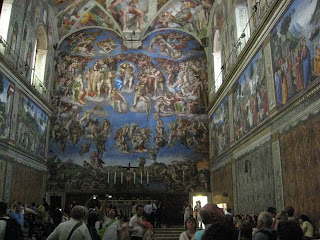 works by Titian and Caravaggio, plus two surprises from Great Britain – Hans Holbein’s portraits of King Henry VIII and Sir Thomas More. Still, the pearl of this collection is Raphael’s portrait of “La Fornarina” – supposedly a depiction of his mistress. It’s very sweet.

I finished my artistic day back on the Via del Corso with an exhibit of woodblock prints by the 19th Century Japanese artist Hiroshige. They were quite lovely, too.

On the way there, I managed to correct a great error I’d made. It seems that on every big trip I make I forget to bring something, and this time it was no different – only this time it was something essential: an electrical plug adapter. I have a couple of these that allow me use American electronic devices (that accept the proper voltage) in Europe, but a fat lot of good they can do me sitting in a drawer in New York. I managed to borrow one at the hotel, but after I 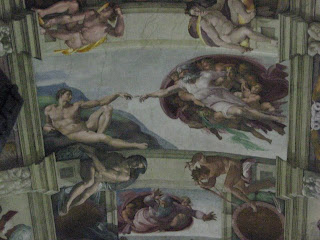 leave Rome, who knew if I’d be able to use my electric razor or recharge my batteries or music player again?

Well, as I was walking down the street, I happened to look down a cross street and saw a sign that read “Electricita.” I figured that an electrical shop is as good a place as any to find an adapter, and indeed the store had one. The man didn’t speak any English, but I stayed for a few minutes and had a little conversation with him in Italian. I tried the adapter back at the hotel and it works, but as the thing is square rather than round, it doesn’t appear to fit all outlets.

Finally, for my friends Lin and Dr. UL, to prove that I have a heart (or perhaps it shows that I don’t), here is a selection of Roman fashion in the windows of shops on the Via del Corso and the Via Veneto. And yes – it includes shoes! 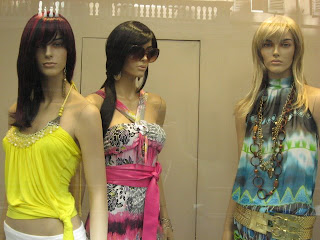 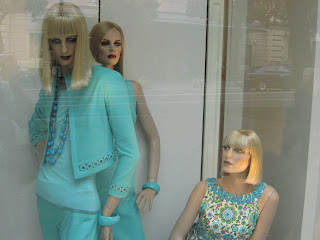 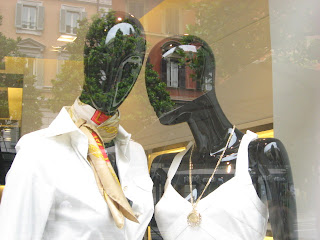 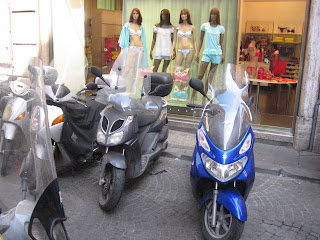 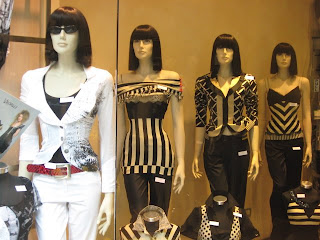 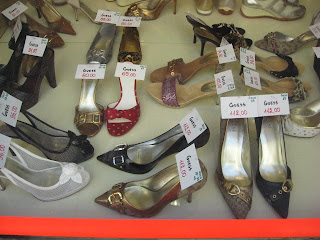 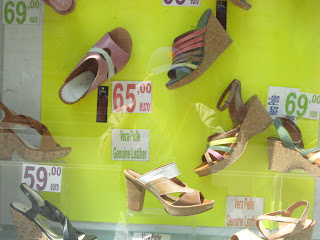 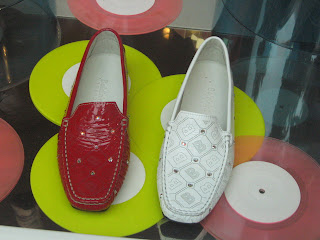 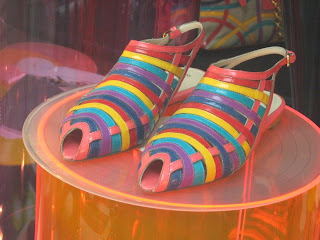 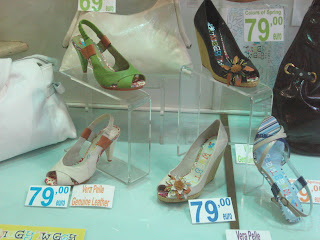 So, that’s all for now. I was planning to write about the things I’d like to do tomorrow in my final day in Rome (going back to Giolitti’s is one of them), but I’ve written enough as it is. Llook for another message from my next destination in a few days.

Until then, be well, everyone.

3 Responses to When in Rome