I wrote last time about the nude figure workshop I attended on the coast of Oregon last weekend. I arrived to the coast a day ahead of everyone else, and one of the things I did on that extra day was to drive down to Newport to pay a visit to the Oregon Coast Aquarium.

While not as large or impressive as the fantastic aquarium further down the west coast in Monterey, California, the one in Oregon is nonetheless a nice place to spend a few hours. One of the exhibits that had was a recreation of a tidal pool ecosystem, with marine life in a large tank that get swept over by a large wave of water simulated a real tide.

Among the marine life in that tank were some large, colorful starfish. The type of starfish I’d been accustomed to seeing was the brownish, monochrome variety, but the ones in this tank were of a multitude of colors. They looked very much like star shaped cushions or pillows, more than anything else.

Well, a day later, at the workshop, I happened to come across some examples of these starfish in the wild when the tide was low. Seeing this type of wildlife in an aquarium tank is one thing, but to see them and get up close to them in their native habitat is another experience altogether. 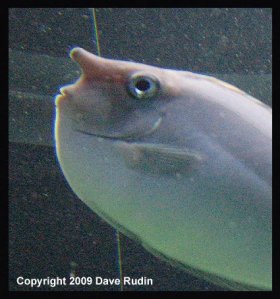 At the aquarium I happened to take some snaps with my little digicam, and perhaps the most interesting one is this fellow here. I saw some beautiful jellyfish floating and pulsating ethereally through the water, along with a cuttlefish – an animal that can change its appearance in so many ways that it makes a chameleon look positively monochromatic.

I want to finish with something a little more serious in nature: the nomination of Sonia Sotamayor to be the newest member of the United States Supreme Court.

I’m a registered Democrat. I normally approve of people appointed by Democratic officials, and I think that having a Hispanic woman on the court is a fine thing. A lot of people say that I’m a liberal, but I really like to think of myself as a moderate – liberal on some issues, more conservative on others. While I (and the rest of the country) need to find out more about the nominee, there are some things about her background that I find troubling.

One is a statement she made that said (and I’m paraphrasing here) that a Latina woman, with her experiences, would more often than not make a better judgement and come to a better decision than a white male would. The reaction of Newt Gingrich to this, I read, was to say that if a white man had made the opposite statement – that white men are better at making decisions than Hispanic women – then he would be lambasted and criticized roundly for saying such a thing.

As absolutely loath as I am to agree with anything that Newt Gingrich has said, I have to side with him on this one. We all have different experiences in life and they lead each one of us to think in different ways, and to suggest that one category of people is better at it than another is wrong.

Still, that’s just talk. What counts here are actions, and the one thing that has me concerned here is judge Sotomayor’s ruling in the case of firefighters who sued the city of New Haven, Connecticut for failing to give them promotions, even though they finished at the top of the promotional exam lists. The reason the exam list was not certified and the promotions not given was that the people at the top of the list were mostly Caucasian and the people toward the bottom were mostly members of minority groups – something the New Haven city elders couldn’t live with. In a society free from racism, race should not matter, but in New Haven it clearly does.

I don’t have a problem with affirmitive action programs. I think having a society where members of all ethnic groups are represented at all levels would be fantastic. Sometimes, though, people try to take it too far. The purpose of affirmative action is to insure equal opportunity, but it should not guarantee equal results. As I heard said once, it should make everybody equal at the starting line, but should not make everyone equal at the finish line. That depends on the individuals’ abilities and how hard they work to take advantage of those abilities.

From what I read, the New Haven fire promotion exams were written in consultation with a company that tries to eliminate any type of ethnic or racial bias in these exams. Therefore, everybody taking the exams had an even shot. The fact that the results did not match the New Haven city elders idea of a utopian fire department should not have been cause to ignore the results – and I’m sorry that Ms. Sotomayor agreed with them. Doing so is simply another form of racial discrimination.

I actually felt such a similar type of discrimination when I tried to register for a nude figure workshop several years back. First I was told that I was signed up, but then I was told that I couldn’t be in the class. Why? Because they wanted to have a more even ratio of men and women among the photographers. Now hey, I’ve attended many figure workshops and I do really lament the fact that there are not more women involved behind the camera. The fact is, though, that women had the very same opportunity as me to register for that workshop, and for me to be bounced because of my gender is nothing less than sexual discrimination.

Regarding the New Haven case, it’s much more serious because it’s a matter of public safely. During last year’s presidential campaign, in the matters of people looking for someone who can turn the economy around and whether whites would vote for Obama, somebody said this: When you’re drowning, you don’t care what the color is of the person who’s coming to rescue you. Unless someone happens to be a member of the KKK, I guess that statement is true.

So I’ll ask this question: If you’re trapped inside a burning building and you need the fire department to rescue you, who do you want those firefighters to be? People who were selected based on their ability to save you, or people who were chosen based on their ethnicity???

I think judge Sotomayor should ask herself that question and think of how best to apply the law to it. While I imagine that I agree with her on some of her other rulings, this case in particular has me concerned.