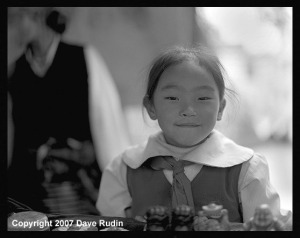 I’ve titled today’s posting “Hide and Seek” for a couple of reasons. First, this is my first posting in more than a week, and some of you may have wondered if I went into hiding. The answer is: no, I didn’t. I’ve just been busy.

When you’ve got a bunch of different things to work on, you can either do a small amount of work for all of them and never really finish anything for a long time, or you can work on finishing one thing and neglect the other stuff. Lately I’ve been doing the latter, trying to finish the work on the DVD I’ve been putting together about the Community Zoe get-together that I attended back in September in California. The work on that has pretty much been taken care of now, so I’m now able to get to doing other things like scanning film, working on my new website and writing blog entries, as well as the domestic stuff that’s ever present.

Now on to the other reason for the title of “Hide and Seek.” Basically, hide and seek is what the photo at the top is about. During my travels through east Asia in recent years, I’ve seen that trying to photograph kids is something of a game to them. They’ll often run away and hide 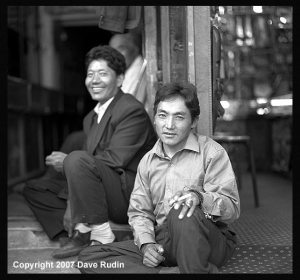 when I try to take a picture, but they’ll be laughing and smiling the whole time. One time a girl in a village ran away into a house but she kept peeking out from behind the door, and after I next took a photo of a couple of older girls with my digital camera, she bolted out the door at full speed to see the result when I showed it to the other girls. (I did eventually get a photo of the younger one, too.)

That event happened in Laos, as I recall, but the picture above was made in Lhasa, the capital of Tibet. As I’ve written before, the Barkhor is the old Tibetan area of Lhasa (the rest of it being mostly a Chinese city) and is filled with pilgrims who come from all over Tibet to pray at the Jokhang Temple and other places. The pilgrims circumambulate around the temple, and the route is lined with vendors’ tables and booths, in addition to the stores in buildings.

Not to be deterred, I continued to play along with her for a bit longer. Then it happened. I 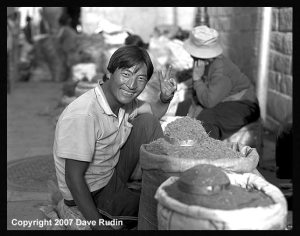 dropped down, she stood up, I popped up again – and then she stood there motionless, looking at me and my camera for a few seconds. It was long enough for me to quickly focus and snap off one shot before she dropped down beneath the table again. I can only imagine that she decided to be nice to me and allowed me to take her photo. As it turns out, I’m kind of glad it happened this way, as I did get a nice image and it gave me a story to tell, as well.

Regarding a couple other things, I don’t know if I’m the only one having this problem, but I was unable to access my blog page or those of several others the last couple of days. The problem seems to be with blogs having the adult content warning. I’ve been able to see those that don’t have the warning, and I’ve even been able to access those with the “objectionable content” page that comes up first.

Finally, looking over my recent entries, I see that I haven’t posted any nude work for a while, so I’ll try to put some up soon for those who don’t object to that kind of objectionable stuff. Stay tuned.

1 Response to Hide and Seek