The Plain of Jars and Other Stories from Laos 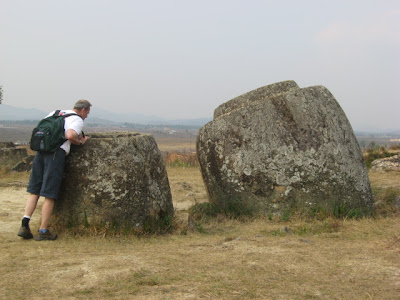 Sorry for the delay in writing, but I didn’t have internet access for the past six nights. Right now I’m back in Vientiane, the capital city of Laos, at the same internet cafe from which I wrote last time.

The past week has been a fairly busy one travelling around Laos. My group is a small one – only eight people – and everyone has been getting along with each other well. Four of the others are 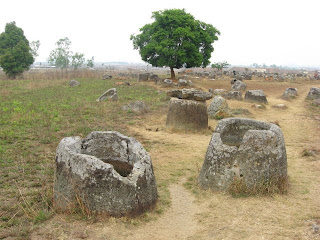 Australian plus two Americans and a woman from Norway. I opted to save money by sharing a room but as there is no other man doing the same, I’ve had a room to myself, anyway.

After leaving Vientiane a week ago, we travelled north through flat terrain to a fairly new town called Vang Vieng, where we spent two nights. The town is in a beautiful location along the Nam Song river and is surrounded by magnificent outcroppings of mountainous looking rock formations.

The town is a popular tourist and backpacker location, too, so there are plenty of restaurants. There’s also a Buddhist temple there with its resident complement of monks; I saw some of the young guys on clean-up duty and I think I got a good photo of one of them. I also stopped to change film in front of a barber’s shop. When he saw me he asked if I wanted a haircut, so I just took off my baseball cap and told him “No hair.” I tried to get a photo of him in the barber chair but he declined to sit there, so I took some photos of him sitting in front and next to his set-up, with the chair visible in the background.

Following Vang Vieng we continued northward to the UNESCO World Heritage town of Luang Prabang. This time the trip was through beautiful mountainous scenery, though a few years back this was a dangerous stretch of road due to insurgents shooting at vehicles. It was on this trip that I had my only mishap: I tried to climb beneath a road barrier to try to take a photo from the other side, but when I realized that I couldn’t do it I tried to get up. I stumbled instead and my left elbow and left knee crashed into the gravelly roadway – though my greatest attention was paid to keeping my camera in my right hand from hitting the ground. (I succeeded.) 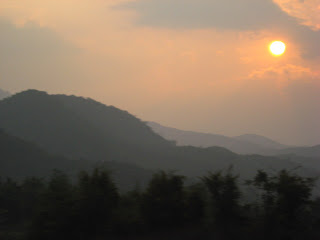 The result was some bloody scrapes around my elbow and my knee, though luckily my pants weren’t torn – and of course that the camera wasn’t damaged. I couldn’t sleep on my back that night as it hurt too much for the point of my elbow to be lying on the bed. It feels better now though it’s still sore. The same goes for the knee.

As for Luang Prabang, it’s the only destination on this trip that I’ve visited before. It’s still a beautiful place, though it seems to be definitely more crowded and busy than it was on my visit two years ago. Perhaps that’s a false impression, as a first visit usually gives one a sense of wonderment that subsequent visits lack, but that’s the way it seemed. In the evening much of the city also becomes a night market, with vendors just setting up their wares on the streets to sell. It all seems a bit too much now.

Unlike my last visit, this trip included a nice boat ride on the Mekong River the Pak Ou caves, which are filled with Buddha statues, and the waterfall at Kuang Si, which are quite beautiful. I tried to get a long exposure photo of the main fall by putting my camera, on a table tripod, on the railing of the bridge in front of it – but as it’s a wooden bridge and shakes whenever someone walks upon it, I can’t say if the results will be any good.

The other notable thing about my visit was the hotel where we stayed, which was on the edge of 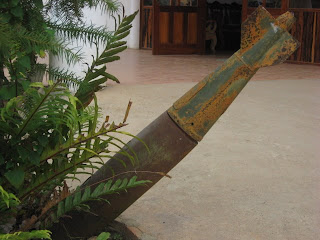 town. One guidebook said that the rooms in the back are better because those rooms don’t get the street noise that the front rooms do. What that book didn’t mention was the rooster living just outside the back rooms’ windows and which kept sounding off loudly all through the night. As I told people after my last visit to Laos, the rooster does not wait until daybreak to start cackling, and this one seemed to start around 3 a.m. with a loud sounding off at an average interval of about eight or nine seconds. (I know, because I counted!) Being someone who usually wakes up in the middle of the night and has trouble falling asleep again, this certainly did not help.

Yesterday we left Luang Prabang to make the journey south and then east to the town of Phonsavan. The road to Phonsavan also was off limits not too long ago due to insurgent activity, but the only danger we encountered were the many sharp curves on the road. The primary reason for visiting this area is a place called the Plain of Jars. This is an area containing hundreds of ancient stone jars scattered across the landscape, and no one knows exactly what their purpose was. Some of them are quite large – the guy in the photo at the top is 6’2″. I had read about them a few years ago and it was fascinating to finally see them. 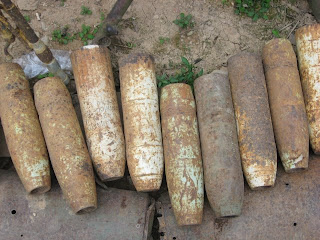 The area of Phonsavan is also known for its being heavily bombed by the Americans during the Vietnam War, being fairly close to the Lao border with Vietnam. Our hotel had quite a few spent shell casings displayed in its front yard (including one with an American warranty sticker still on it, believe it or not) and in the lobby were several shelves displaying small cluster bombs (“bombies” is the local name for them, I’ve read) and other wartime items. On the plane flight out today I also saw quite a few bomb craters scarring the landscape.

Anyway, I’m back in Vientiane now for our final night of the tour in Laos. I’ll be joining most of the others for dinner at an Italian restaurant called L’Opera. There’s another restaurant of the same name (and the same ownership, I imagine) in Bangkok. I ate at that one three years ago on my final night in Thailand and since then I’ve wanted to eat at the one in Vientiane. Of course, at the time, I thought that Laos was a difficule to get to place and I never imagined that I’d be here so soon after.

Tomorrow, a new adventure begins with a flight to Siem Reap in Cambodia – the town closest to the magnificent ruins of the great city of Angkor. Hopefully I won’t have to wait a week to write about it.