First Anniversary – and On The Road, Too! 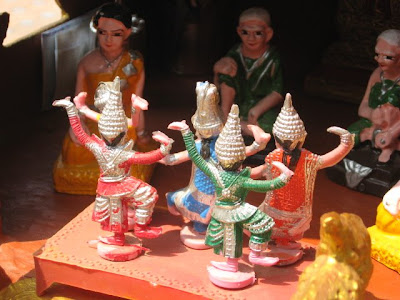 March 1, VIENTIANE – Hi, everyone. Today is a special day in the history of this blog. One year ago, on March 1, 2007, I posted my first blog entry here. My, how time flies when you’re having fun! A big thank you to all of the readers out there who’ve taken the time out of their busy lives to follow my ramblings and my photos here.
Perhaps it’s also fitting that I’m sitting here now writing this in an internet cafe in Vientiane, the capital city of Laos and the first stop on a trip to Laos and Cambodia. This is my second trip to Laos – I was here two years ago – but the first time to Vientiene (which is actually pronounced ‘Viang Chan.’) 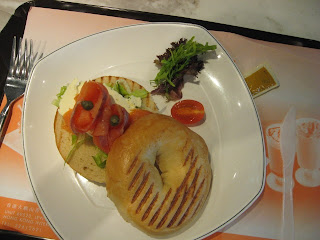 he trip over here from New York took 25 hours and three airplane flights. (I’ve had to take two flights to get places, but I think this is the first time that I ever needed three.) The first leg was the longest – 15 hours on a Cathay Pacific 777 from JFK to Hong Kong. That was followed by a Cathay Pacific flight to Bangkok and then a Thai Airways flight to Vientiane.

That 15 hour flight would seem to be the most difficult to endure, but it really wasn’t that bad. Their 777 is a pretty nice plane, with wide screen seatback video screens and plenty of good (and unedited) movies on demand even in economy. I caught up on my movie viewing by watching five (count ’em!) films – Before The Devil Knows You’re Dead, Michael Clayton, Atonement, Beowulf and Juno. Tilda Swinton won an Oscar recently for her performance in Michael Clayton, but if anyone in that film deserved it then it was Tom Wilkinson. I could see that Beowulf would have looked great in 3D – I’m sorry that I didn’t gt to see it that way like I’d wanted to last year.

As for my actual trip here, the tour group will have its first meeting in about an hour and a half from the time of this writing. I arrived a day early yesterday, so today I walked around this fairly quiet city (said to be “the sleepiest capital city in the world”) with a Norwegian woman on the tour who also arrived last night. Vientiane is a city along the might Mekong River – across that river from Thailand – but today the river didn’t look too mighty. At this time of year I think the river is fairly low but has much more volume in the spring and summer. As it is now, most of the wide river bed is dry; it seems like one can almost walk over to Thailand on the other sice. 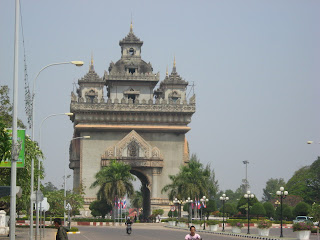 Perhaps the most unusual and interesting thing I saw today was a dog riding on a motorbike. No, the dog wasn’t driving itself, but it was seated in front of its master like kids on so many other motorbikes. The dog was sitting up with its paws on the handlebars, and as the driver saw me trying to get some photos, he tried to get to dog to look my way. The dog seemed to take the whole thing in stride, yawning several times as he and the driver were waiting for the light to turn green. I think I got at least one decent photo.

Well, I’m starting to feel a little tired – only managed a few hours sleep last night after more than 27 straight hours of staying awake – so I should wind things up now. Tomorrow is the first day with the group together (I think there’ll be eight or nine of us) and after a half-day city tour, we head north to a place called Vang Vieng which is said to have some beautiful landscapes around it.

Oh, today’s photos: details of a spirit house – a thing seen here and in Thailand (top); the bagel-shaped roll with lox and cream cheese that I had for lunch at the Hong Kong airport (two); and the Patuxay, Vientiene’s answer to the Arc de Triomphe in Paris (three).

So, until next time, be well, everyone!

1 Response to First Anniversary – and On The Road, Too!