Jacqueline In The Forest 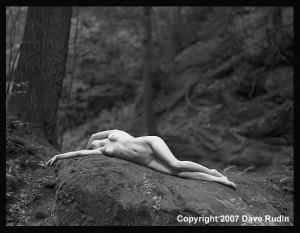 I’m kind of busy here at home tonight, with plenty of things that need taking care of, so this will be a short entry tonight.

The photo I’m posting here is one of Jacqueline Chantelle in the forest at the Hocking Hills in Ohio. I made the photo when I was visiting my friend Dave Levingston last summer. Dave suggested this location and was kind enough to drive to pick up Jackie, and then head in the opposite direction to head out to the Hocking Hills. Of course, he had to do the whole thing again in reverse later on, so thanks for all of the driving, DL.

A lot of people have commented positively on this photo in other places I’ve posted it online, so I’ve I’m posting it here. You may have seen it on Univers d’Artistes, where I posted it along with some other photos of Jacqueline, but I think it deserves to be posted here, too.

Actually, the day this photo was made was a difficult one. The Hocking Hills area is a beautiful location, but when we got there a bunch of joggers were strolling around our chosen site, taking their time. When they finally moved on, I also had to contend with an upset stomach that had me running to the latrine every ten minutes or so. (NOT good for photography!) We later moved on to some other very beautiful spots, but again, too many people around made photography difficult to impossible. Even Jackie was getting upset and impatient at having to keep her clothes on. In the half day or so that we were there, I might have spent about an hour (if that much) actually photographing her.

Of course, coming home with an image like this one here seems to have made the whole ordeal worthwhile.

3 Responses to Jacqueline In The Forest