Well, it’s just past 10 pm here in New York so I thought I’d sit down and finally write my entry for tonight. I’d planned to do a bunch of things and then watch a Star Trek video, but I instead have spent most of tonight talking on the phone with friends and looking up possible trips for next year on-line.

I don’t have any newer photos to show than the photos of the Sarah’s. I’ve gotten more film developed since those but I need to file that film and then make some scans. The latest film developed are photos of Jacqueline Chantelle (http://www.modelmayhem.com/member.php?id=192748), who I really had fun working with in both April and July.

As I mentioned before, I went to the PhotoPlus show at the Javits Center, way over on the west side of Manhattan, on Saturday. I didn’t see any camera bag companies there as I’d seen in the past (I once spoke with the founder/owner of Tamrac there), so my search for a new bag will need to continue elsewhere.

The show itself for me, as I also wrote before, is not it once was. Part of it is the whole digital thing, but it seems like a lot of companies that once showed no longer are there: I mentioned Tamrac, but I don’t remember seeing Mamiya and others who used to be there. I used to see a lot of people I know but not so much this time, either. The highlight was spending time with my friend Renie from the Santa Fe Workshops as I hadn’t seen her for several years.

As for the vacation planning, my thoughts are still up in the air for next year. I’d like to continue my photographic exploration of Asia, so I’m considering places like Bhutan, India, Mongolia, Uzbekistan and Turkey. I still have time to decide. 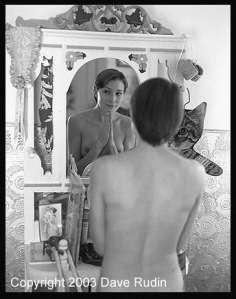 Photographically, the photos I’m posting today are from the archives. At the top is model Candace Nirvana in her Manhattan hotel room in 2003. Next down is Cyd, photographed in my hotel room in New Orleans in anti-deluvian times (also 2003). Finally, a photo of Gabrielle in an old Victorian era house in upstate New York made at a workshop in 1995. I like the look on her face in the mirror.