Kids on the Street, Bepa, Tibet 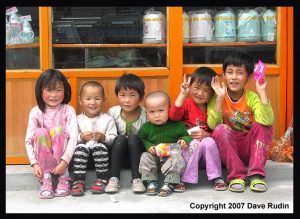 Well, today is the Labor Day holiday here in the U.S., which means that most people here can get a little more sleep for a day. Thankfully, I was able to do so. In fact, this weekend was the first time since my return from Tibet that I felt awake enough to watch any videos. (I watched “Roman Holiday” on Saturday and “Sabrina” last night. I might complete the Audrey Hepburn trilogy today with “Breakfast at Tiffany’s.” )

Anyway, as far as my photography goes, I am still waiting expectedly to get my advanced copy of NUDE: The Art of Women (www.carrieleigh.com/ ) in the mail. As I wrote last time, all indications are that this quarterly publication has been produced with the highest quality. It should be an excellent showcase for my work and the other photographic artists included. Hopefully I’ll get it in a day or two.

For today’s posting, I’ve decided to write about the photo at the top. I picked up a few 11 x 14 inch prints of Tibet made at Adorama a few days ago and showed them to some people in my office. Everybody seemed to love this photo seen here. Here’s the story behind it: 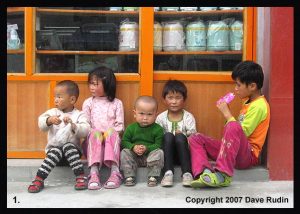 Most of the first half of my trip to Tibet was to a part of eastern central Tibet rarely visited by Westerners. On the way heading back west to the capital, Lhasa, we stopped for lunch in a small town called Bepa. Like many such towns, Bepa has one main street lined with buildings that have shops and restaurants on the ground floor. After finishing my meal, I had a few minutes to walk up and down the street to try to take some photos.

After photographing a number of different people, I came upon this group of kids sitting on the sidewalk in front of a building. The photo at the top was the one that I had printed up, but in fact it took four photos for me to finally arrive at this image. I’ve decided to post all four photos to show how this came about.

In the first photo (labeled ‘1.’), there are five kids. Three of them seem oblivious to me. Two are looking off at something else and the third seems only interested in his drink. For the second photo (‘2.’), I decided to move in closer, but I’ve only got the attention of one of the kids.

Then something else happened: a sixth kid showed up. The little girl with the pink pants and shoes (on the left end in photo 3) then took charge of the situation. She re-arranged everybody, fit in the new girl (the one with the red shirt, second from the right) and then basically demanded that I take another photo of the group! Of course, I was only too happy to do so, but as seen in photo 3, getting the attention of a group of kids all at once is not an easy thing. Finally, with the fourth photo (top) I was able to do so.

Of course, besides these photos with my compact digital camera, I was taking photos with my Pentax 67 film camera, so there was some other give and take going on, as well. Still, I’ve pretty much explained things as they happened, and the kids seemed pleased when I showed them the photos on the back of my digicam.

Throughout these photos, the one thing that seems consistent is the look that the little boy in the green shirt was giving me. Either he is one helluva serious kid or I did something to really piss him off. In each photo, if looks could kill… – well, I probably wouldn’t have come back from Tibet alive!

So, that’s it for today. Enjoy the rest of the holiday weekend, everyone. For my next posting I hope to give you a report on the new publication. As always, stay tuned.

3 Responses to Kids on the Street, Bepa, Tibet