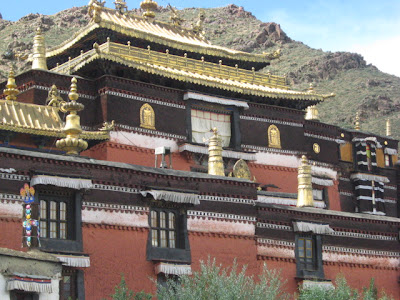 I’m back in Lhasa tonight after spending last night in Tibet’s second largest town, Shigatse, and the night before that in a town called Gyantse. The traveling two days ago was pretty intense. We got off to a start three hours late for reasons I won’t go into now. Most of the day was spent 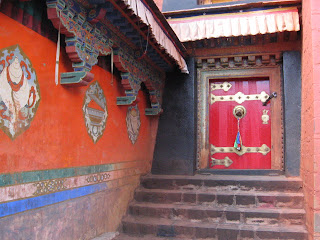 on the road, and though the day was long, the scenery where we were – as has been the case in all of Tibet so far – was absolutely spectacular. Part of the journey was a drive on a dirt road between two major paved roads for about an hour that brought a sense of adventure back to traveling. We also passed throuhg some small villages which were interesting in their own way.

Yesterday was devoted mostly to sightseeing of Buddhist sites. We started off with a walk through Gyantse, including a visit to a local market and an old street in the old Tibetan part of town. I expected to see – well, an old street – an though it was a street with old buildings, what I did not expect to see (and did) was a cow or two (or three) tethered to each house. I guess time hasn’t changed too much in some places.

Then it was a visit to the Pelkor Chode monastery, which includes the circular, tiered Kumbum Stupa, one of the most beautiful buildings in Tibet. A drive to Shigatse followed followed by a visit to the Tashilumpo Monastery. The monastery includes a whole set of buildings and reminded me a little bit of an old Ivy League-style college with its many buildings and cloisters. Unfortunately, there seemed to be nearly a hundred Chinese tourists there for each monk that I saw. Some of the monks were willing to be photographed, others weren’t, but at the end of the day we came across half a dozen middle aged monks who requested to be photographed and wanted the photos sent to them. I’ll try to comply. 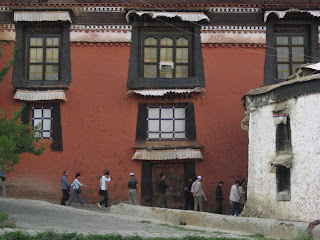 I also spoke with a number of interesting people yesterday. While eating lunch in Gyantse, I saw that a small Spanish speaking group was at an adjacent table and that one of them looked rather like William Shakespeare. On the way out I went over and mentioned this to him and he turned out to speak English very well and said “I hope that’s a good thing.” He also noticed my big camera and remarked that he was thinking of bringing his Hasselblad film camera along but ultimately decided to bring a digital camera.

That evening, while having dinner at the hotel restaurant in Shigatse, I noticed the same group of people there. Again, while on the way out, I said to him “Buenas noches, Senor Shakespeare.” He stood up and shook my hand and said he’d like to talk about photography after he finished eating, so we met half an hour later in the hotel lobby, sharing our respective photos – me with my little digital camera and a booklet of B&W photos I’d printed up of photos of Asia, he with his laptop computer. His name’s Pedro and he lives in Barcelona, so perhaps I’ve made a new photography acquaintance. 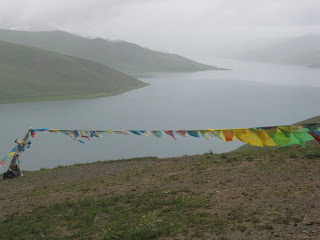 I also spent some time in the restaurant talking with a couple from England. It turns out the husband is a big “Doctor Who” fan who’s been following the series for a very long time, so we talked about that and other British television shows, as well as about travel in Tibet, etc.

Finally, today was the drive back to Lhasa. We left Shigatse very early – around 6 a.m. – and while I expected it to be a bit cool, I hadn’t realized that it had been (and still was) raining, so rather than cool it was actually cold. Naturally, not realizing this, I packed my jacket in my suitcase and wasn’t able to get it out until we arrived back here in Lhasa. On the way we made a detour to the top of 15,800 foot high Kambala Pass. While the air at that altitude is pretty thin, the cold bothered me more than the thin air. Luckily I chose to wear a long sleeve shirt!

The reason for driving up the pass was for a view of the beautiful Yamdrok-tso lake. While the surface of the lake takes on a turqouise color on a sunny day, the rain and overcast gave it a more normal looking hue – but it was stunning, nonetheless.

So, here I sit here once again in Lhasa (though at a different hotel than last time) writing my last message from Tibet. Following dinner at a vegetarian Chinese restaurant, I walked out onto the balcony of the hotel and used my small table tripod to take photos of the Potala Palace, illuminated as it is at night. Next, after I’m finished at this computer, is to repack my suitcase so 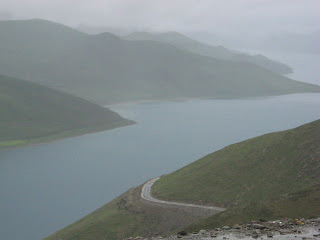 I can get it under the 20 kilo (44 pound) weight limit for the flight to Beijing tomorrow. To do this I will have to pack as much as I possibly can into my carry-on bags, my pants and shirt pockets as well as my jacket. It won’t be easy.

So, that’s all from Tibet. It’s been quite a journey, but hopefully not the last one here. Travelling to Tibet is not the easiest thing to do, what with the long airplane flight to Asia, stomach ailments, the high altitude, etc. – but it’s worth the effort to be here.

The photos here, by the way, show the Tashilumpo Monastery in Shigatse and the Yamdrok-tso lake.

1 Response to Farewell to Tibet