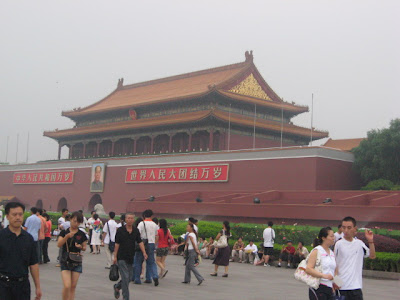 Well, here I am, back in China – Beijing to be specific. I was here 18 years ago – and what a difference 18 years makes!

First, though, my flight here was uneventful except in the route we took. On all previous flights to the Far East the plane flew northwest toward Alaska and then over the Pacific Ocean to its destination. I was surprised this time when the plane was heading northeast – until I realized we were taking the polar route!

We flew over Quebec and then Newfoundland. As I had a window seat, I had a beautiful view of the coast of Quebec’s Gaspe Peninsula and the St. Lawrence River, plus the land on the opposite side. I also finished watching one of the movies (which I was dozing through, anyway) to open the window and catch site of the northern tip of Greenland. I got some decent photos of this, too. Then the ice covered Arctic Ocean of the North Pole. Clouds covered Russia’s Siberia, but I did get a pretty decent view of Mongolia, it’s landscape seen from the air reminding me very much of the American Southwest.

Today was an overcast and very day here in the Chinese capital. I got to the hotel around 3 pm and went out after 4 to stroll around a bit, including going to Tien An Men Gate by the square of the same name. 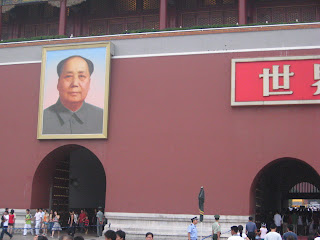 Often the most lasting impression of a place is the first one – the ride in from the airport to the hotel. This time was no exception. Although I’ve been here before, it seems like a new place – and 18 years might as well be 80. The biggest change I’ve noticed is the relative lack of bicycles. In 1989 the streets were packed with them and cars seemed to be a rarity. Nowadays, while bicycles aren’t exacty rare, they are definitely outnumbered by the automobiles. So go the times.

Tomorrow will be a big day as the members of my five-person group (I haven’t met the four others yet) fly up to Tibet to begin our two-week journey there. Hopefully all of our lungs will be able to handle the high altitude and its thin air. I have a feeling that web access will be limited there, so I may not be able to write again until we arrive at the Tibetan capital, Lhasa, in about a week or so.