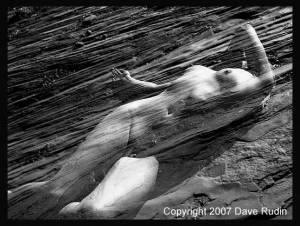 In this case, that’s short for Double Ex – or ‘double exposure.’ I have wanted to work with the creative possibilities of in-camera double exposures for some time, and now and then I’d make a photo using the idea. It was all random and haphazard, though, and nothing was ever consistent. Sometimes I’d go out to a photo shoot with making a series of double exposures in mind but I’d just plain forget. Finally, at Prince Edward Island in Canada last summer, I remembered.

These photos here are images of Rachel on the island

’s beautiful rocky coastline. One shows her ‘inside’ a large rock covered with barnacles (or barnacly-type things) and the other two show her as part of a stratified rock formation. One of the things I’ve tried to do was to show her as being a part of the rock, as if encased in it. I think these turned out fairly well, though I’ll try to hone my skills at this (if I can remember, that is).

These photos were made with my Pentax 67 camera, but I also made some double exposures on the island with my new Holga – though most of the were unintentional! Still, the results were somewhat interesting and I’ll try to post them sometime in the future.