The Best Laid Plans of Mice and Men…..

As readers of my blog will know, I went to Ohio last weekend to visit my friend Dave Levingston and to work with some models there. I photographed six figure models there on a total of 28 rolls of film. I had planned to begin developing that film today, but I must report that any film developing will have to wait.

That’s because I was hit by a car crossing the street Friday morning. (Yes, I am 100% serious about this.) The collars of my shirt and jacket were soaked red with the blood coming from my head. An ambulance came, the paramedics gave me a quick once over, then they restrained me

on a stretcher and lifted me up into the ambulance. The neck restraint was the worst as I felt like it was almost choking me.

The next stop was the emergency room of a local hospital, where they gave me (I suppose) the full treatment – squeezed and poked all over, needles stuck into me, EKG, x-rays, CAT scan, etc.

While I do feel very thankful indeed that I am still alive and kicking after what happened to me (I was, after all, hit by a car), the injuries that I sustained do make it impossible for me to develop film (and to do other important things) at the present time and perhaps for the near future. Sorry about this, but sometimes life just has a habit of getting in the way.

Or, as John Steinbeck famously wrote, “The best-laid plans of mice and men often go awry.“ (Steinbeck, by the way, got the line from a poem by the Scottish poet Robbie Burns: “The best-laid schemes o’ mice an’ men gang aft a-gley/ An’ lea’e us nought but grief an’ pain for promised joy.“ I certainly know the part about pain)
Oh, and by the way, if you’ve ever wondered what it feels like to be hit by a car, take it from me – you don’t want to know!

Woodstock, New York. I’ve written before that I began photographing nudes at the Woodstock workshops, and while I am well beyond the need to take workshops, I still try to go once a year to get some feedback on my work, meet other photographers and potential models, etc. Getting out of the city for a weekend is nice, too. I also hope that maybe my prints will prove to be an inspiration to those people just starting out, just as others were inspiring to me when I was starting out. 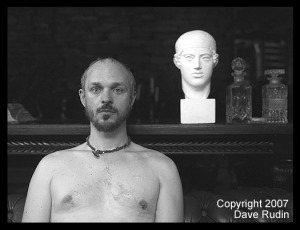 This year, if anyone is interested, nude figure workshops will be lead by George Holz, Connie Imboden and Eikoh Hosoe. More information is available at the website of the Center for Photography at Woodstock: http://www.cpw.org/WPW/wpw2007.html . (And no, I do not benefit personally from anyone signing up.)

6 Responses to The Best Laid Plans of Mice and Men…..