By the Light of the Silvery Moon

Hi again, folks. Just to reiterate, I’m on part three of the series of blog entries about the figure nude photo shoots in did in late 2003 and early 2004. My last entry was about a trip to Ohio. This new one is about a photo shoot in early February 2004 right here in New York. It’s also a photo shoot that almost didn’t happen.

I need to again thank my friend Dave Levingston for his help in arranging this one. The photo session took place in a loft near 9th Avenue by Manhattan’s west side meat packing district – a space rented at the time by one of Dave’s friends who was kind enough to let me use it for a few hours for a nominal fee. 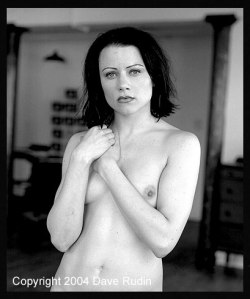 Two models were scheduled – Theda B. and Kate Mandala – and they both showed up on time. The space was ready, too. So how did it almost not happen? I decided to take my gear with me via the subway as I felt that I probably wouldn’t be able to find a parking space if I went by car. I myself had no trouble getting there. The problem was that the train lurched at one point and knocked over my tripod – breaking the ball head in the process!

As I was working indoors with nothing but available light, a tripod was an absolute necessity. Unfortunately, the only way to get the ball head to stay in place was to really push the locking handle hard and lock it up tight. It worked – but the down side was that I needed both hands to unlock it and recompose for each photo. Fortunately, I had Kate or Theda to hold onto my camera while I needed to push with all my might to unlock the ball head. Otherwise, the camera would have fallen over and smashed into the tripod with no one to hold onto it. It was a very awkward way to do things and a real pain in the neck, but given the circumstances, I had no choice – and, it worked!

As for the shoot itself, I began working in a studio-like space – basically an empty room with windows – but as I find such blank spaces to be rather uninspiring, we later moved into the living quarters. I think I made more interesting images there, as I at least had some ‘real’ backgrounds to work with.

The image at the top shows Theda sitting on the floor, with Kate’s legs visible as she stands in the bathroom doorway. The second image is a portrait of Kate and her beautiful eyes, made inside the studio area.

The final image here was toward the end of the session, when I just had the idea to make an image backside-to-backside. While I was composing this image, I told them that, for some reason, it made me think of the phrase “By the light of the silvery moon.”