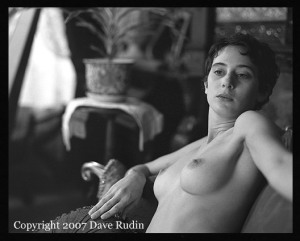 I recently sent in my Epson 4490 flatbed scanner for repair and yesterday I got it back. For some time now, it would make a nasty grinding sound when scanning reflective (i.e. paper) items. Lately though, it was giving me black lines through my images when scanning medium format film. (This is the reason why I bought it a year ago – because the old one was doing this – and now the new one was doing it, too! At least it was still under warrantee.)

I checked out the reflective scanning last night and it was fine. Tonight I decided to try it with film and post the results here if they were acceptable. You’re seeing the images now, so I guess you can figure out the results. 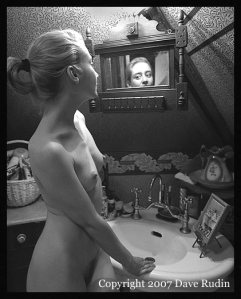 These three photos were made in November 1995, less than three months into my ‘career’ as an art nude photographer. It was a one day, invitation only workshop at a Victorian era house in Troy, New York. The instructor was a woman named Elizabeth Opalenik, who I was to study with several times again and whose opinion I still value today. It was also my first time working with the nude at a non-studio interior location, so for that alone it was interesting to me.

The photo on top, I must admit, is a ‘poached’ image, as that particular model, Jojo, was working with another photographer who was photographing her from straight on. I was in the next room and saw this view. I liked it, so I put the telephoto lens on my Pentax 67 (so as not to get too close and interfere) and prayed that she would not move. Luckily, she didn’t, and I made this image. I have always liked it because of the background and her grande dame attitude.

The second image was made quite differently – the bathroom Sheila and I were in was so small that I was forced to use my wide angle lens and back up to the wall as much as I could. I think the mirror helped to add a sense of greater space and depth, and I find a sense of mystery in her reflected eyes, as well. 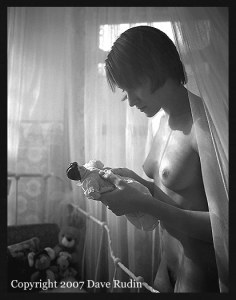 The last image is of Gabrielle, a model I had worked with twice before. I remember telling her that I wanted her to feel like she was acting out a scene, revisiting her childhood. She responded by saying that she was a model, not an actress! Still, she was a very good model, and I think there’s a sense of innocence here despite her nudity – maybe looking back to a simpler time in her life – or perhaps the nudity is a sign that she’s outgrown those days.

Another thing I remember is that, after I hadn’t gotten my copies of the model releases, I called up Elizabeth to ask where they were. She apologized and told me the envelope with them had fallen on the floor and was chewed up by her dog – or, in other words, “the dog ate my model release!” (I received them shortly thereafter, and if anyone wishes to take a workshop, Elizabeth is a very good person to have as a mentor. She is also finally publishing a book of her work. Her website is http://www.opalenik.com.)