I guess that every photographer who’s worked with models for a number of years has some of those muses who just stand out above the rest. For me, one such model was a lovely girl from Scotland named Rhowena.

I had seen and admired photos of Rhowena on the web, and when I read that she was planning to visit New York, I contacted her to try to set something up. Unfortunately, on the day that she was to arrive in NYC, I received an e-mail from her saying that her trip had been cancelled for various reasons. 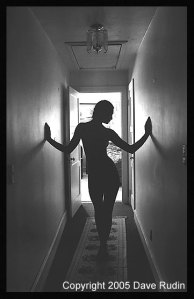 Luckily, I would have another chance. Some months later, in winter 2003, she planned another trip to New York to work with me and another photographer, Dale, who admired her, as well. As Dale had a house in upstate New York in which to photograph and I had no location, we decided to work at his place. I picked up Rhowena at Kennedy Airport, and then she and I rode up to Dale’s place, where we took turns photographing her that weekend.

Rhowena proved to be a superlative model, possessing the three things that I think make a good model: physical beauty; the inate ability to move and pose; and ease of working with. I’ve worked with few other models who had these qualities the way she did. Other than that, I will let the accompanying photos speak for themselves.

Fortunately, I would have the chance to work with her again that year and in 2004. It turns out that she was going to Las Vegas with her boyfriend (a pro poker player) at the same time that I was there to visit family. Sometimes things just work out that way, and I made some more quality images with her in the Nevada desert. (I’ll write about those another time.)

On the other hand, one must take the good with the bad. That same boyfriend who brought her to Las Vegas ended up marrying her, after which she retired from modeling. Even another model who worked with her wrote to me that Rhowena’s retirement was a great loss to the modeling world. Oh, well – I guess if she’s happy then we should all be happy, too. I’m just grateful that I got to work with her as much as I did.

By the way, Rhowena won $25,000 last year in a televised poker tournament for amateurs in Las Vegas. I guess modeling isn’t the only thing she’s good at!